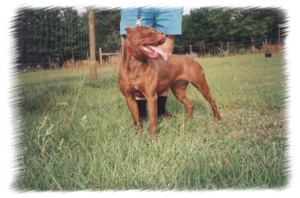 He looks no more out of place in the Ancient landscapes of 16th century paintings than he does in the ultramodern setting. It is beyond my capabilities to imagine an end to him, for every generation seems to supply a nucleus of hard core devotees completely committed to the breed. In any case, you can look into the murky past, and you will find it difficult to discern a beginning place for the breed and fortunately, the future seems to threaten no demise either.

Old strains are a particularly fascinating part of this tradition, and the Old Family Red Nose is one of the better-known old strains. The appearance of the red-nosed dogs always attracts attention, but it takes a little getting used to for some people to consider them truly beautiful. However no one denies that they radiate "class."

Characteristically, a dog of the red-nosed strain has a copper-red nose, red lips, red toe nails, and red or amber eyes. Some think the strain was bred for looks. Others consider any dog that just happens to have a red nose to be pure Old Family Red Nose. It is hoped that the following will dispel such notions. About the middle of the last century, there was a family of pit dogs in Ireland bred and fought chiefly in the counties of Cork and Kerry that were known as the "Old Family." In those days, pedigrees were privately kept and jealously guarded. Purity of the strains was emphasized to the extent that breeders hardly recognized another strain as being the same breed. For that reason all the strains were closely inbred. And whenever you have a closed genetic pool of that type, you are likely to have a slide toward the recessive traits, because the dominants, once discarded, are never recaptured. Since red is recessive to all colors but white, the "Old Family" eventually became the "Old Family Reds." When the dogs began coming to America, many were already beginning to show the red nose.

The "Old Family" dogs found their way to America mainly via immigrants. For example, Jim Corcoran came to this country to fight the World Heavyweight champion John L. Sullivan, and stayed to become a Boston policeman. He sent for dogs from his parents back in Ireland, and his importations and expertise as a great breeder have earned him a prominent place in American Pit Bull Terrier history. Many other Irish immigrants also sent back to their families to request for dogs, and the "Old Family" and related strains became firmly established in the United States.

At this point, there are several factors that are somewhat confusing to a student of the breed. For one thing, the term "Family dogs" was used in two ways: It could mean a strain of dogs that was a family unto itself that was kept by a number of unrelated people in Ireland, or it could refer to a strain of dogs that was kept and preserved through the years by a family group. However, the old Family Reds seem to be of the first category. Another point that arises is that with all these importations from Ireland (and there were importations from other countries, too-including Spain), where do we get off calling our breed the American Pit Bull Terrier! Well ... That's a point! The breed does not really belong to any one country or even any one era! However, I don't believe many people are in favor of changing the name of the breed even though it is not strictly an American breed. For that matter, , it is not really a Bull Terrier either! But the name American Pit Bull Terrier has become part of that tradition we were talking about, and I think most of us prefer to keep it as a formal name for the breed.

Back to the Old Family Reds. The first big splash made by the red noses was back around 1900 when the great breeder William J. Lightner, utilizing Old Family Red bloodlines, came up with some red-nosed dogs that really made a name for themselves. Now Lightner once told me that he did not breed for that red-nosed coloration. In fact, he did not even like it and he only put up with it because the individual dogs were of such high quality. Eventually, Lightner gave up on the red-nosed strain when he moved from Louisiana to Colorado, where he came up with a new strain that consisted of small dark-colored dogs with black noses. He had given up on the other strain because they were running too big for his taste and because he didn't like the red noses.

At this point in our story, we come upon a comical, but highly-respected, figure in the personage of Dan McCoy. I have heard old-time dog men from all over the country talk about this man. Apparently, he was an itinerant fry cook and not much of a success in life judged by normal standards, but he didn't care about that. But what he did care about were Pit Bull Dogs, and he had a wealth of knowledge about the breed. His uncanny ability to make breedings that "clicked" made him a respected breeding consultant and a most welcome guest at any dog man's house--even if he had just dropped off a freight train!
Always with his ear to the ground regarding anything that involved APBT's, McCoy got wind of the fact that an old Frenchman in Louisiana by the name of Bourgeous had preserved the old Lightner red-nosed strain. So he and Bob Hemphill went to that area, and with the aid of Gaboon Trahan of Lafayette, they secured what was left of the dogs. McCoy took his share to the Panhandle of Texas and placed them with his associates L.C. Owens, Arthur Harvey, and Buck Moon. He then played a principal role in directing the breedings that were made by these fanciers. And from this enclave came such celebrated dogs as Harvey's "Red Devil" and Owens (Ferguson) "Centipede." Hemphill eventually kept only dogs of the red-nosed strain. According to Hemphill, it was McCoy that first starting using the term "Old Family Red Nose" for the strain.

Another breeder who was almost synonymous with the red-nosed strain was Bob Wallace. However, Bob's basic bloodlines was not pure Old Family Red Nose. But in the late 40's, he was looking for the red-nosed strain in order to make an "outcross." (Bob was a scrupulously careful breeder who planned his breedings years in advance.) Unfortunately, he found that the strain was nearly gone, most of it having been ruined by careless breedings. He managed to obtain seven pure red-noses of high quality whose pedigrees he could authenticate. The strain was subsequently saved for posterity and in the 1950's became the fashionable strain in Pit Bull circles. In fact, it was Bob Wallace who wrote an article in 1953 called "There is no magic in Red Noses" in which he tried to put a damper on the overly enthusiastic claims being made by some of the admirers of the strain. No more fervent admirer of the Old Family Reds ever lived than Wallace, but he obviously felt that the strain could stand on its own merits.

Many strain have been crossed with the Old Family Reds at some time in their existence. Consequently, nearly any strain will occasionally throw a red-nosed pup. To many fanciers, these red-nosed individuals are Old Family Red Noses, even though the great preponderance of their blood is that of other strains. Sometimes such individuals will fail to measure up and thereby reflect undeserved discredit on the red-nosed strain. However, as Wallace said, the red noses should not be considered invincible either. They produce their share of bad ones as well as good ones--just as all strains do.

As a strain, the Old Family Red Nose has several things going for it. First, it is renowned for its gameness. Second, some of the most reputable breeders in all Pit Bull History have contributed to the preservation and development of the strain. People like Lightner, McClintock, Menefee and Wallace, just to mention a few. Finally, as McNolty said in his 30-30 Journal (1967) "Regardless of one's historical perspective, these old amber-eyed, red-nosed, red-toe-nailed, red-coated dogs represent some of the most significant pit bull history and tradition that stands on four legs today."